Should your leadership team be committed? 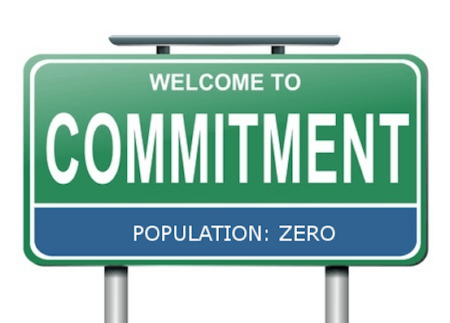 ​I was attempting to title this post “Is Your Leadership Team Committed?“, but as I dictated into the microphone, out popped “Should your leadership team committed”. Huh.  No need to go back and correct that one, except to add the word “be”.  I kinda like the nuanced way it turned out.  It felt more honest.

Is your leadership team crazy (and should it be committed to the insane asylum) by continuing to talk and talk ad nauseam, while nothing actually gets resolved?

Recently, I was talking to a member of a non-profit board that is creating a new strategic plan.

To set the new plan, they’d been meeting for five months, twice a month.  They formed the group, understood the reason for the group, developed a framework on process, set ground rules, a target date, and agreed on the hopeful outcome.    Then, the group initially went on ‘listening tours’, meeting with small groups of over 100 of their constituents, to learn what they felt was broken and what they wanted for the future.  They use a ‘statistically proven’ survey and got specific and informative feedback from over 200 people.

Armed with all of this information, they went to work on outlining the vision and process for their organization and it began to move forward seamlessly, with everyone on the same page.  Over a series of meetings, the group came up with a vision, and made headway on the process to fulfill that vision.  They’d even shared that vision and process with about 60 constituents in a ‘town hall’ format, to give progress report and to elicit feedback on what they’d come up with. The feedback was positive.

Five months into the process, bedlam.  A single email was received from a constituent, who’d said that a “small group” had met and now disagreed with a key component of the vision agreed and stated in the progress report. Specifically, they suggested that the organization “should not be tied down to the new process” outlined in the board’s initial progress report, and that if some individuals wanted to do their own thing and move along the process to their own model, they should be able to do so.

The board met to discuss the email. Of the nine who had all officially agreed with all of the strategic components of the plan, one of them blurted out that they didn’t think what they’d decided already was a good idea.  Another quickly joined, followed by a third.  When pressed, it turned out that two of the members had been against the core ideas from the beginning, had never voiced their concerns, and though they ‘agreed’ to go along with the majority, had been actively campaigning against the new proposed strategies with key people outside the board.  It turns out that the external email came from one of those people.

The result of a lack of commitment?  Five months wasted, and no new strategic plan. Worse, the organization is now in serious financial trouble, and has lost many long-term members over the lack of clarity and purpose.

Does your leadership team have commitment?

No team of people will have 100% agreement on a decision.  In Patrick Lencioni’s book, The Five Dysfunctions of a Team, A Leadership Fable Lencioni talks about what a good team does.  It’s a team that can trust each other, then be able to debate an issue, but then a good team will also come to a decision that will be then be verbally committed to by each team member, regardless of whether two or three felt that it was the wrong decision.  Then share this with the rest of the organization and followed by all.

Consensus…..sucks. It doesn’t work. Rather, a healthy leadership team needs to weigh in on an issue, solve it, and then buy in. Essentially, disagree… then commit. Listen to the issue, yes. Discuss and disagree on the issue, yes. But commit to a decision, which is then followed by all.

Lencioni can sum it up better than I can.  Watch this short snippet:

How well is your organization and leadership doing?

Talk to us about how you can take the Organizational Checkup™, and get a gauge on where your business is on the journey to being exceptional.  You can even have the rest of your leadership team take it and compare results.