Why your decisions may be worth nothing 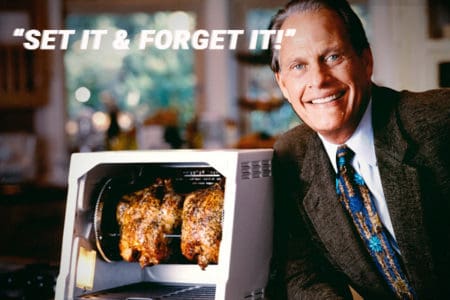 1980’s Ad for Showtime Rotisserie oven…set it and forget it?

Decisions not documented, communicated or reinforced are like they never existed.

Once upon a time, long before the EOS® model came into my life, I worked on the leadership staff of the Chairman of a multibillion-dollar division of a Fortune 100 company.

The company distributed its products through a network of its own reps and concurrently through several large third parties as well.  We called that channel conflict – and it was a big issue.

During a quarterly review session, the Chair asked the assembled leadership team for an update on the progress of their channel conflict plan.  Then…silence.

Growing agitated, he turned to the head of sales – “so what’s going on in the field?”  “Well, sales are steady,” the leader said, “but we’re still getting the same complaints and I’m worried that some of our key producers are going to jump ship.”

The head of product development said, “we’re still waiting to get critical input from sales and client service to shape the features of the new line.” One second later the head of client service leapt to her feet and exclaimed “we’ve never even had a kickoff meeting, so we have no idea what information you need!”

By now, the Chairman’s jaw had dropped and his head was shaking in disbelief. “Wait, we spent hours deciding on how to handle the channel conflict issue at the annual offsite six months ago – and we haven’t even started yet?”

“What are you waiting for?”

So let it be written…

Over nearly three decades, I’ve worked with many brilliant and charismatic founders, owners, chief executives and their leadership teams.  I’m sure you’ve read all about the characteristics successful leaders share.  But I’ve noticed one that I’ll bet you won’t find in books written by Covey or Collins or Drucker:

Once they’ve made a decision, it’s as if their word has made it so.

Many great leaders seem to believe that once they have given the word, processes are instantly changed, people have been redirected and resources allocated.

The issue never goes away

Truth is, while a difficult decision may have been made, it often hasn’t been fully clarified, documented, communicated and measured.

Therein lies the reason why the same issues arise again and again.

Once a decision has been made, the clock starts ticking.  Those people present when the great decree was made have only days to make decisions tangible.  With each hour that goes by, the risk escalates.

Because the details of those decisions will be almost completely forgotten within 7 days, resulting in almost no chance of getting it right. 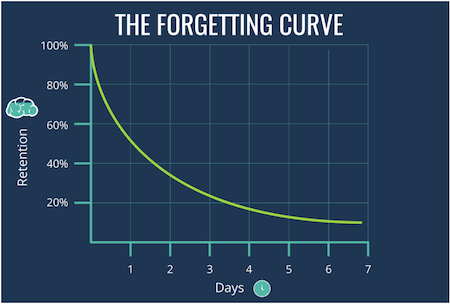 Here’s what research shows the forgetting curve to look like:

That’s why decisions need to be clarified and documented almost as soon as they are made.  If that isn’t done, it’s a near certainty that the same issue – in one form or another – will reappear on the leadership team’s table over and over.

Time and money are wasted.  Morale and resiliency are tested. Productivity and competitiveness drops.

Beyond the need to clarify and document, the forgetting curve insists that we provide several booster shots of reminders along the road of execution.

As anyone who has attended an EOS® Focus Day knows, the journey to becoming a great leadership team includes the adoption of an important parental quality: repeating yourself often.

Even extraordinary leaders can overlook the necessary steps to ensure their decisions get put into practice and stay on track.

The forgetting curve is a constant threat to execution.

Key items subject to the forgetting curve include those most basic to your business:

Talk with us about building your system of clarifying, documenting and rolling out your critical decisions and processes – and ensuring you stay on track as part of your EOS  implementation.